The Beast Retires: He was initially told he was too fat to play football

Adebayo Akinfenwa must be proud when he finishes another gym session these days and looks at the horizon while hydrating himself.

The Englishman ended his playing career and ended it in a big way: in a final at Wembley, in front of seventy thousand spectators and a great game of football. The player himself said that he would always be perfect, whether he played two minutes, ten or fifteen. Fifteen games are over. All they had to do was score a goal and win the final, but it was still big.

“I’m doing my last dance at Wembley … if I had written the script, I wouldn’t be able to do it any better,” admitted Akinfenwa. Athletic.

It was 22 years, 14 clubs, more than 200 goals and about 800 games. He has never played in an English league and has only been in the Championship for one year. He spent virtually his entire career in League One and League Two, the third and fourth tier of English football, but that didn’t stop him either.

He became a football star with a YouTube channel with 1.4 million Instagram followers, 300,000 subscribers and two million views, launched a clothing brand called “Beast Mode On” and has already made his debut as a commentator. Football on television.

All of this has never been seen before in the English league, nor has it entered the big brother.

“I was told I was too old to play football … and the truth is I have been playing for 22 years. So one day I will sit down and say, ‘You know, you did everything right’.

It wasn’t easy, Akinfenwa went through a lot of things all his life.

Born in Islington, a suburb of north London, to Nigerian parents, he began as a Muslim under the influence of his father, but eventually converted to Christianity.

“When Ramadan started, my father used to fast for us. Later I started reading my mother’s Bible and converted. Today I read the Bible and go to church every Sunday. ”

Since he was a child he was physically very strong, which earned him the nickname ‘Beast’, which he gladly accepted and worked perfectly as a marketer. Nevertheless, from a young age, his body aroused suspicion among football fans.

Akinfenwa, however, was a sports fan and a Liverpool fan. He even said that one day, when he faced the Reds, he warned his Wimbledon teammates that if anyone took Gerard’s jersey, they would have problems. No one dared to do it and she stayed with him.

So, being a football fan, he did not give up his dream. He spent his childhood playing in the Rounddown Sunday League, Hackney Marshes and Market Road, and as a teenager he joined Watford’s youth team. There he met a businessman who was married to a Lithuanian woman whose brother was working in FK Atlanta, Lithuania.

At the age of 18, Akinfenwa became an immigrant and moved to Balti.

In Lithuania, he received death threats and even racial harassment from the club’s own supporters. The first time this happened, he called his older brother to say he wanted to return to London. The brother asked him if he really wanted to come back knowing that the racists had won.

Akinfenwa must have been two more years. 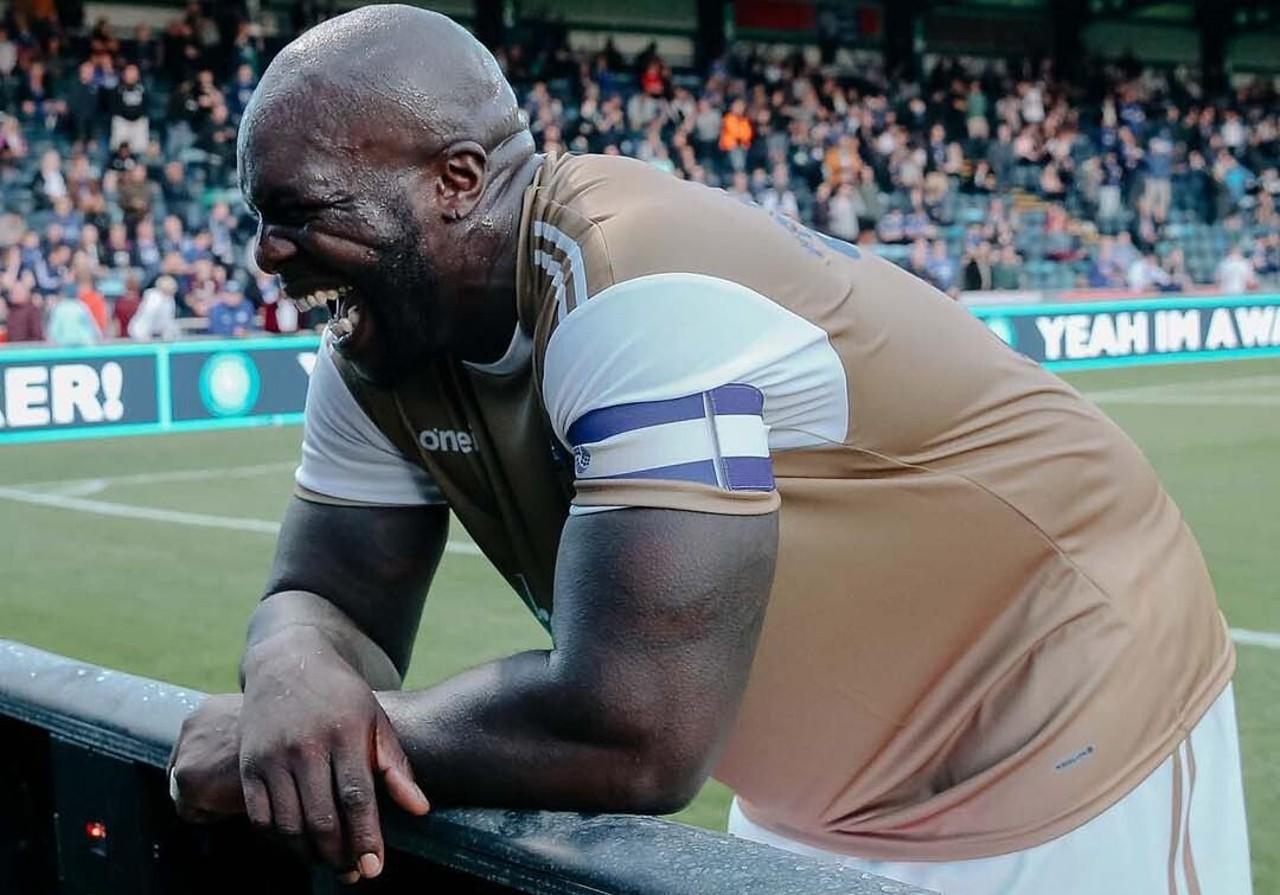 “We are the product of our environment and the experiences we live in. Lithuania raised me. Why should I let my soul enter negatively from those from whom I will not take a single piece of advice? In Lithuania they say they want to kill me because of my color, in England they say I’m fat. So I thought, ‘Why would these things affect me?’ I have reached a point where I feel comfortable with who I am and move on. “

He scored in the Lithuanian Cup final, which FK won the most tasty trophy in Atlanta history, played twice in the UEFA Cup qualifiers and was eliminated.

He then traveled through Barry Town from Wales before returning to England to represent Boston, Layton Orient, Doncaster, Rushden, Torque, Swansea, Millwall, eight clubs in five years, and thirteen clubs in twelve years.

During this time, he was already in the news because of the weight of 100 kg and the muscle that allowed him to lift 190 kg. But what I read in the press was not always pleasant.

“I remember the commentators saying, ‘Well, he doesn’t have a bad touch for such a big man.’ Or: ‘He’s heavy, but he’s got off the ground fast.’ I understand, we are humans and we are visible animals. But big or small, I can head well and I know I like ball touch. I know I’m not going to fly over anyone, but when I get the ball in the box, I know someone better than No, that’s my office. “

By getting better and stronger, he really became a media event in 2016. At the end of a game where he scored a goal that ensured Wimbledon’s promotion to League One, Akinfenwa provided a flash-interview that went viral and spread around the world.

“I think I’m technically unemployed, so the coaches who are watching me call me on WhatsApp and give me a job,” he shot live.

The request was successful and contacts have been deleted He said he had received an invitation from Argentina to Australia.

“I think looking at my direct messages on social media, even from the CEO, there was communication and I thought: ‘I should have done this a few years ago!’ It was insane. “

At the time he was already the most powerful player in FIFA, the popular PlayStation game, and after that interview he was invited to launch the game alongside football stars.

“I remember they took a poll on FIFA and asked which card people were most concerned about, me or Messi. And I lost Messi. I was like, ‘What ?! Wait a minute, what am I missing here? ‘”, He confessed Guardian.

“My reputation off the field is much more than what I made there. Yes, yes, yes. It doesn’t make sense to me. “

If Akinfenwa thinks about it, however, it won’t be so understandable. First, there is the natural curiosity about how such a fat striker on the field behaves with such a body so detached from the model of a football player. In addition, English is charismatic, very confident and extremely fun. He has a sense of humor that delights the fans.

After leaving Wimbledon, and calling on all the coaches in the world to call him, the forward went on to play for Wycombe, where he spent six years and the best years of his career. What was the only appearance in the second English league, including promotion to the Championship.

“I was here four years ago and I was technically unemployed. So I want to tell you something: the only person who can call me on WhatsApp today is Klopp, so we can celebrate together. “

And true, call Klopp. Or rather, sent a video message on WhatsApp.

“Congratulations, big man. I didn’t get a chance to see your flash-interview, but my players warned me that I was the only one who could join you today. So here we go. Congratulations, great victory today “, the coach said in a message minutes later.

Now, at the age of 40, he is ending his career, with a defeat that prevented Wycombe from returning to the championship. But that’s not what’s most important.

What’s important is that the “legend of English football”, as Guardiola told him, is gone, but he will continue to wander. On social media, on television or in advertising. Retirement should not be a problem for a person who has built a remarkable reputation during his career.

Nowadays, before embracing anything else, you should look at the horizon and be proud. At the end of another gym session.

“I am just a habitual animal. I ride my bike for 47 minutes every morning and try to burn 850 calories. It’s my routine, my time is just for me and I will continue to do it. I like the gym. Someone forces me to go, I go because I want to. I also have two daughters and one of them is about to turn 16, she’s going to go to that dating episode, so I’m going to the gym too …! “

Otherwise, he wants to survive. Feeling as comfortable as you are and reminding people that there is nothing stronger than loving yourself for who you are.

“Now that the world is following, I want to conquer the world. I am waiting for this challenge, for another emotion. As a player I have known for 22 years, but in any sector, especially football, people become institutionalized. We are a bubble where we are told where to go, what to wear, how to think. So entering the real world is starting again. It’s an exciting challenge and I’m looking forward to it. “

How is INSS retirement after separation?

What does the 7-seater Toyota SW4 SRX look like in real life?